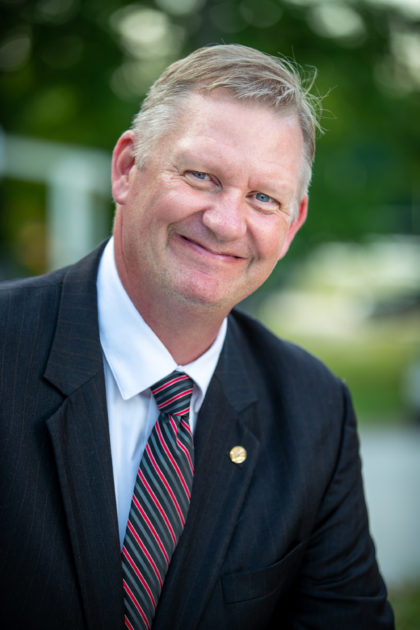 A native of Lincolnton, Georgia, Headmaster Benson Clayton Parrish earned his Bachelor of Science degree in Industrial Management from Clemson University and his Master of Arts degree in Education from Augusta State University.

Headmaster Parrish has been a member of the staff at Briarwood Academy for over twenty years.  He taught health and physical education from 1996 to 2009 and middle and high school mathematics from 2008 to 2013. He served as Athletic Director from 2003-2009 and Principal from 2003-2012. In addition to being a teacher and administrator, Mr. Parrish has been an accomplished coach for men’s & women’s basketball and women’s track for more than a decade.   His honors include coaching 4 state championship teams, being named Georgia Independent School Association Coach of the Year 4 times , being named The Augusta Chronicle  Basketball Coach of the Year five times and being selected three times to coach the GISA North/South All Star Basketball Game.

Now in his sixth year as Headmaster, Mr. Parrish continues to work toward his goal of making Briarwood Academy a premier academic option for all K-12 students throughout the CSRA while maintaining the traditions and family–friendly environment that make Briarwood such a rewarding place to attend school.  Specifically, under the leadership of Headmaster Parrish, Briarwood Academy has implemented the modernization of the technology available to students and teachers.  This was accomplished by improving internet speed and capabilities as well as by introducing the use of Smart Boards in the classroom.  He bolstered Briarwood Academy’s academic credentials by increasing the Advanced Placement opportunities available to students to seven classes including Biology, Music Theory, Calculus, Literature/Composition, Language/Composition, and both United States and European History. He continues to add well qualified academic instructors to an already reputable teaching staff.  A few of his future goals are to obtain SACS and SAIS accreditations to supplement Briarwood Academy’s existing GAC accreditation and to continue upgrading the classrooms and athletic facilities to accommodate a growing student body.

Mr. Parrish and his wife, Valerie, have two daughters, Mackenzie and Abigail who both attend Briarwood. The Parrish family resides in Evans, Georgia.

Briarwood Academy admits students of any race, color, national and ethic origin to all the rights, privileges, programs, and activities generally accorded or made available to students at the school. Briarwood Academy does not discriminate on the basis of race, color, national and ethnic origin in administration of its educational policies, admissions policies, scholarship and loan programs, and athletic and other school-administered programs.